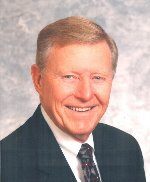 University of Florida
Class of 1958
LL.B.

University of Florida
Class of 1962
J.D.

University of Florida
Class of 1955
B.A.

Charles serves as chairman of the board and founding director of GrayRobinson, where he continues to practice full time in the 270-plus lawyer firm. He has served as city solicitor for the city of Orlando, chairman of the Florida State Turnpike Authority, chairman of the Economic Development Commission of Mid-Florida, and chairman of the University of Central Florida Foundation, and in many other leadership positions. Charles served for seven years as county attorney for Orange County and was involved in developing the county's Tourist Development Plan, the Orange County Civic/Convention Center and the Orange County Comprehensive Growth Plan; resolving the building moratorium in Orange County by developing a modern waste-water treatment and potable water program using innovative methods and financing; and consolidating 16 separate fire districts into one unified county fire department. Charles organized and served as general counsel for the Orange County Health Facilities Authority and has represented major developers in large Development of Regional Impact reviews, comprehensive plan amendments, and major state- and county-negotiated property acquisitions.

Charles and his wife, Saundra, have a website for their now-completed sailing trip around the world.